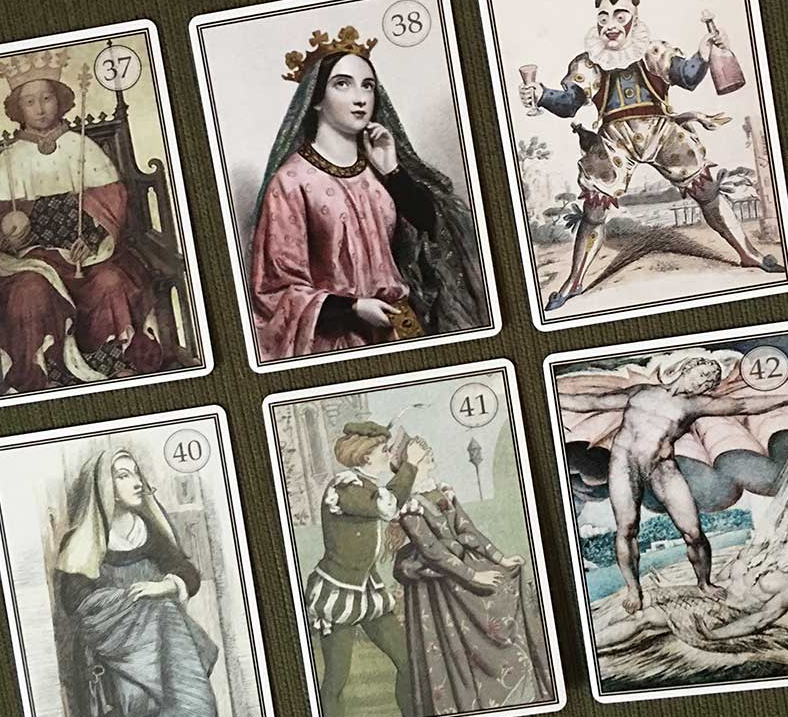 The third edition of my White Mojo Lenormand Oracle Cards was just released.  When I noticed that there were less than 20 decks in stock at the store I knew it was, of course, time to order more. But I also knew that the cards were never exactly as I had envisioned them so I decide to tackle the cards again and give them a complete redesign.

Editions 1 and 2 both had the name of the card on the surface was well as the divinatory meaning. As a seasoned Lenormand card reader, I found that I wasn’t using my own deck to read cards. Instead, I was reaching for the traditional deck — the one with simply the picture, the card number, and the playing card association.  So, that is how I decided to go forward with the third edition. I had to make it more …… “Lenormandish.”

The images I use for the deck are old images found in the public domain, some of them as old as 400 years.  They came from a variety of unusual sources: old fairy tale books, medical journals, old paintings by unknown artists, vintage advertisements, and the list goes on. With the original deck, I was never able to find anything to represent the SCYTHE card or the COFFIN card and decided to rename them “Swords” and “Death” instead.  With a long and tedious search, I uncovered the proper imagery to restore their original Lenormand names in the third edition, bringing back SCYTHE and COFFIN.  For the WHIP & BROOM card, the first two editions focused on the broom, depicting a witch. The third edition focuses on the whip, showing Christ being tormented by a scourge.

I did, however, keep the six extra cards I added to the deck. I find them helpful in completing a reading, bringing up subjects that Lenormand doesn’t always fully address. Also, many people have written to tell me how much the enjoy the addition of the six new cards. I did, however, give the cards a facelift with new king and queen images. The extra cards are numbered  but show no playing card association, as they are not a traditional addition to Lenormand cards.

I do like the new backings for the cards. The previous editions had a collage of faded stars on the back.  The first edition, including the companion book, was dark blue. The second edition was the “red edition.” This third edition brings back the original blue theme, leaning more towards indigo. The new back has shades of this blue by using an old, out of print playing card back.

My WHITE MOJO LENORMAND CARDS are available for sale on our aromagregory.com website for $22.95 by clicking here.