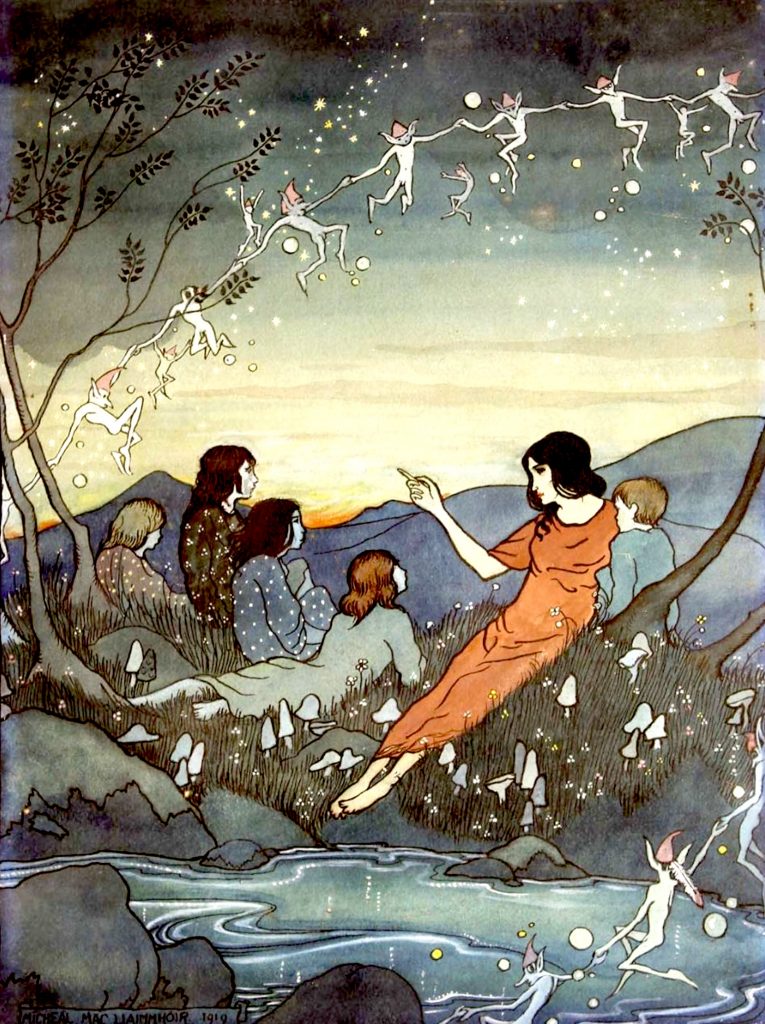 The Fairy People of Ireland and Scotland – Meet the Sidhe

The Sidhe are unique to Ireland, although Scotland and Ireland share much fairy lore. These are not the type of fairies that fly around as they please, in your garden or in the forest. Guarding them with their magic and mischief, able to control and mingle with you if they wish – These fairies are real. They follow a legend of old, one full of history and wisdom. The fairy lore of Ireland and Scotland is old magic, and was carried into the American Appalachian mountains when the Scots-Irish settled there. That which was forgotten in time has returned to Ireland. Now it is their land, but this fairytale comes complete with rules that can only be followed or else all will perish.

The Sidhe are fairies of Irish mythology (or so says the Irish Lore). They live underground in sidhe-mounds across the countryside (such as Newgrange) or hidden within them. When one travels across the famous bogs of Ireland, it is possible to see them. Sidhe-people materialize into a human form and rise from beneath the ground, often in white robes, and stand frozen as they watch you pass by. In parts of Ireland (such as Northern County Cavan), fairies are known to be fair with golden hair and fair skin. However, in other regions such as Ulster, fairies have darker hair and olive skin. Some fairies have dark hair and fair skin; others fair with black hair and brown-black eyes. As for height, they can be as tall or short as any human being, though the male fairies are often taller than humans.

There is much folklore about fairies in Ireland (and in other countries also). Some fairies ride each night on a horse named Pooka across the moon (or a cow called Coo-ee if there’s no moon), while others dance around maypoles to celebrate certain festivals. The people of Ireland were wary of fairies for many reasons, such as stealing children to replace them with changelings (“changelings” are known as “béothuigsin”, which means “wished for child”, and are fairies themselves). The fairies are also known to take away fine horses as their own (or they can give you a horse of their own if that is what you desire), and fairies have been seen riding through the air on steeds made of mist.

Some fairies have the power to shapeshift into many forms. The fairies are able to put you into a trance-like state (trances can be caused by humans also) and then remove some of your blood, replacing it with that from another place or time – this is how fairies come about their magical powers. They are known as fairies because they make “fairy forts” where they keep all of their treasures; these fairie forts may be guarded by fierce monsters such as kelpies (“water horses”). Fairies also have fairie dogs and cats, which are smaller than common domestic animals but very loyal to them.

The interesting thing about fairies was that in early times if you went to a fairie fort (or fairy rath) and were kind to the fairies, they would reward you with many gifts. However, if you stole from them or in any way wronged them, they could kill you, steal your children for fairies to raise as their own (a fate worse than death), or curse you so that fairies took all of your property and belongings. The fairies will also play tricks on people such as making husbands disappear only to bring them back later in a day’s time; however, wives may be transformed into sheep for about seven years by fairies.

The fairies stole not only human children but also animals. There was a certain brownie named Browny who liked to steal lambs when the farmers’ backs were turned. However, he was kind enough to leave them unbruised and safe from harm. It should be noted that fairies in Ireland do not eat flesh; therefore cattle may graze freely in the fields undisturbed by fairytale creatures, unless it is Beltaine or Samhain when fairies dance and mingle with humans.

Many fairies have a dislike for clothing, especially if it is new. Therefore they will take your garments to their homes beneath the ground, never to return them again. It has been said that fairies in Ireland do not wear shoes (they may be barefoot), but there are some fairies who like to put on clothes (usually linen shirts and knee-breeches) in order to pass as humans during the day time. If you leave soup out at night, fairies may come snatch away your bowl without leaving any traces of themselves behind.

Several Irish fairytales include tales of fairie maidens named Aibell or Caer Ibormeith who can shapeshift (or “beshape”) into a white deer. They are fairies of immense beauty and some even possess a sugar-bowl sized cauldron filled with healing herbs in Bantry, County Cork, which is said to be given to them by Saint Patrick himself.

The fairie people were known for their immortality; however they will perish if exposed during the day time or if they touch iron, both being strictly forbidden within the fairytale world. The fairies have many enemies around Ireland including goblins (“sgiolai”), water fairies (“dunduns”), and the evil faery cleric Balor of the Evil Eye (Balor was born with one eye that would destroy anything that it looked at; fairies are said to be his descendants). It was known that fairies were afraid of the Holy Bible, and refrained from crossing its path.

The fairie people are ruled by a monarch named Aobh who is a member of the Tuatha Dé Danann . The fairies have no concept of time as humans do; however they try their best to make it seem like Ireland is having Spring, Summer, Autumn, and Winter just for them (and us too!). If you want to see fairies in Ireland, you’ll need an invitation from one first. Otherwise they won’t come out because they can only enter human homes when invited.

Elements that make up the Sidhe:
The Sidhe fairies are a supernatural race of people. They have magic and fairytale qualities about them like no other fair-folk in the world. Once you encounter one, you will be tied to their fate forever more unless you break the fairytale spell. There is only one way this can happen:
A pure soul must find their true love before they do. The ‘true love’ cannot be forced or manipulated; two fairies falling in love isn’t fairytale romance but rather a pact of arranged marriage. The fairy has many chances at finding her true love – if she fails to recognize him then that is it for her and she will become trapped within the fairytale dimension forevermore with no escape possible

These fairies have many different tribes that have specific jobs for each tribe within their society. The Queen is called the Bean Nighe (meaning ‘Washer Woman’). She is fair and young, but her skin is covered in green. She washes the warriors who fought in battles and those who have lost their lives. The job of washing them is her duty to do as she pleases, not caring for the feelings or views of others.

The King is called Aillen (meaning ‘Hazel’). He has a dark appearance… often with red hair and pale flesh that makes him look unappealing when compared to the fairies who serve under him.

If you wish to keep the fae around your property and home, make them little offerings. They like sweet cakes and candy, milk, cookies, and wine. Ask them to help with your honey jar magic. They also enjoy your attempts at creating them tiny shelters to hide inside or beneath. If you leave them shiny offerings of costume jewelry willingly, they may be less likely to “borrow” the jewelry from inside your home.